Steve was born in Birmingham, West Midlands, and showed an avid interest in music from a very early age. His first instrument, a Bontempi chord organ from Woolworths was bought for him at the age of 4 and within a short space of time he was entertaining pupils and teachers in school assemblies. At the age of 7 the Bontempi was changed for a pian, and piano lessons began. Steve loved playing the piano and worked through graded exams but all the time he was developing a great interest in the electronic organ. Many happy hours were spent visiting local organ societies, demonstrations, and shows, listening to the various artists and the fabulous instruments emerging. He became a big fan of the more orchestral instruments such as Eminent, Riha, and of course Yamaha and Technics. By the age of 16 Steve had his first electronic organ, an Eminent (because of those fabulous String sounds) and just 2 years later he entered and won the 1983 Midlands Organist of the Year Contest. This launched him onto his professional career as a concert organist and keyboard player. Steve extensively toured throughout the UK playing for Organ Societies, Keyboard Clubs and Festivals. He was particularly noted for his musical arrangements and orchestral style of playing. He also appeared many times on radio including Radio 2 "The Organist Entertains" and Radio WM "Keyboard Magic". Steve found himself in constant pursuit of top quality sounds and worked with many of the leading instruments of the day, including Technics U90, Technics C700 and Yamaha EL90. Still not satisfied, Steve began experimenting with combinations of keyboards and expanders resulting in a touring set up comprising of Kurzweil, Roland, and Yamaha sound modules midi linked to keyboards and pedals, a set-up that he became noted for wherever he played. Many players today use multi keyboard setup's, but Steve was one of the very first to do so. In 1992 Steve was offered the opportunity to set up his own music shop which he did, quickly followed by a music school teaching organ, keyboard and piano alongside theory, guitar, singing etc. This proved to be a big success but it was also very time consuming and it became impossible for Steve to fit concerts into his hectic schedule, you simply can't be in two places at once, so reluctantly Steve had to retire from the concert circuit. He never did stop playing though as he organised concerts, demonstrations and student shows in local halls and theatres with a long term view that he would one day return to the circuit. That day has now arrived and Steve is delighted to be returning to the professional concert circuit for a limited number of shows each year. He has a brand new instrument set up based around the fabulous Yamaha Tyros keyboards, a new Website with all his latest details including some videos for your enjoyment, and is planning the release of a new CD during 2012. Steve is now taking bookings for Organ/Keyboard Clubs and Festivals throughout th UK and is enjoying meeting old friends and making many new ones at his concert and festival appearences. He is delighted to find just how many people remember him. Even his signature tune, Dueling Banjo's is still requested and remains a firm favourite. Steve is particuarly pleased to have recently played live on TV on Celebrity Big Brother's Bit on the Side. As we all know it is very rare to find organs and keyboards featured on TV so it was a a great opportunity which Steve enjoyed very much. 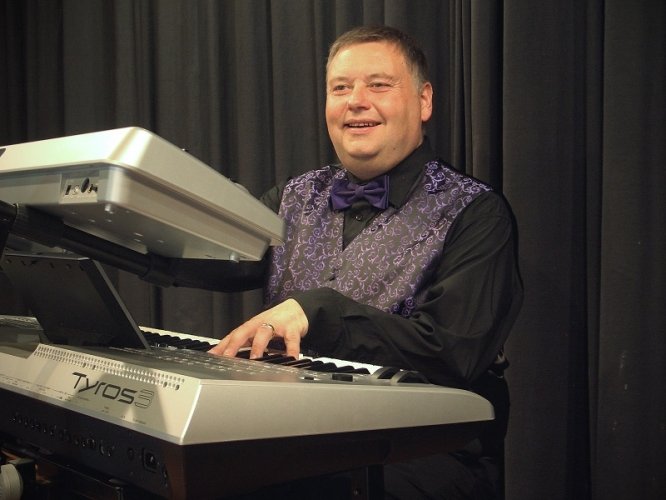