Born in February 1960 at Tyldesley, Manchester and with encouragement from a musical family, Pete has been playing piano since the age of 4. He is very well respected in the organ/keyboard business with which he has been associated for over 41 years and is currently playing the stunning KORG Keyboard products. He started playing semi professionally in the north west working men's clubs at 15 years of age backing cabaret artistes with a 7 keyboard set up !! His love of organs and keyboards took him around the North West in the 80’s and 90’s visiting Organ Societies and AOE festivals where he proved very popular, and now, after a nine year break, he is back on the Organ Society and festival circuit with a new keyboard show including some great vocal performances. One of the most versatile player/performers around, in 2004/5 Pete had his all round musical talents channelled when he was asked to be Musical Director/Studio Producer of an all new theatre road show version of ITV’s ’Stars In Their Eyes. He spent 400+ hours in the studio working on the tracks and written parts for the the live shows, unfortunately due to factors beyond his control the whole tour got cancelled at 1 day's notice to the horror of everyone involved. Over the last 18 years Pete has made many appearances as an extra/background artiste in TV programmes like -CoronationSt/Emmerdale/Cold Feet and many more which he enjoys very much, but he got a call in 2007 from Paul Crone at Granada TV to work as Musical Director on a live broadcast called "Tour Of Talent". It was held at north west seaside resorts through the summer of 2007 over 10 days, Pete said "Over the 10 days we had 1200 acts from singers/musicians/comedians to complete dance groups performing throughout the day - culminating in a daily final broadcast live on ITV's Granada Reports, It was a fantastic experience to work with such a broad range of talent from the North West of England. In June 2009 he got a call from the Ann Atkinson - Musical Director of the Fron Choir in North Wales, and was asked to play at the National Eisteddfodd of Wales in Bala for the 35 strong Bro Glyndwr male voice choir, this he did and again it was broadcasted on channel S4C TV and after the show the presenters commented on the fantastic sound of the keyboards and likened Pete to Benny from Abba and Rick Wakeman also in August 2013 he appeared on TV again with the choir again at the eisteddfod !! As well as working solo, Pete has worked with his wife Yvonne in a very successful dance /cabaret duo called SAREMMA from 1995 to November 2016 (the name incidentally comes from his daughters Sarah and Emma!). Because of their wide variation of music, the duo performed at many Dinner Dance/Cabaret functions nationwide, and picked up three BEST DUO awards from the 2008 City of Culture - Liverpool. After 21 years of working together the duo is now retired. Pete put the finishing touches to his brand new recording studio in 2004 that he has rebuilt since his move to North Wales, PC & Apple based hard disk recording is at the heart of the studio with Korg & Yamaha keyboards plus Roland V Drums forming the main midi sounds, along with 24 audio tracks available for vocal and instrument recording. Demand is still high for his quality tracks and arrangements - by fellow musicians, and artistes alike. Over the Last 19 years Pete has worked for various organ and Keyboard Companies demonstrating their latest products at Organ/Keyboard festivals around the UK, He is currently UK demonstrator for KORG PA series products and regularly appears at most of the major events with them throughout the UK. Pete's pride and joy is his 1965 Lowrey Heritage which he keeps at home with a 145 Leslie. Back in the late 70s then 80s & 90s he used the organ in several workingmens clubs as part of a multi keyboard set up to accompany the visiting artistes at the weekends. He took the Lowrey out of retirement for Caister in April 2004 and it was well received by festival goers and other artistes - especially Howard Beaumont and James Sargeant who played it till 3am one morning, Pete says, 'You could warm your hands on it - it was cookin' ! Pete is now touring with a fabulous new keyboard system - KORG PA4X 76 plus KORG KRONOS 2- 88 note & Bass Pedals plus a fantastic new Bose F1 PA System & lighting (if required) He continues to wow audiences with his individual style of Organ/Keyboard playing and vocals, he has had some great comments from other keyboard musicians and artistes over the years and he plans to carry on working in the Organ & Keyboard business for many years to come. 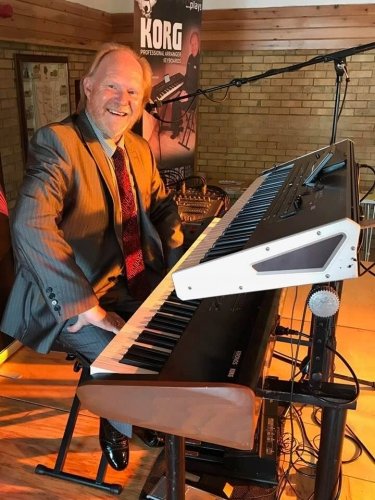