Paul started playing at the age of 12 on the family organ which was a Hammond VS350. At 14 he took first prize in a Midland Arts festival. Perhaps not known is that he achieved a trial for Leicester City Football Club but decided to stick to music and not football. At 20 Paul became a demonstrator for Godwin organs and Gem. At 22 he worked for Yamaha as a demonstrator alongside Glyn Madden. He has worked with the Orla Organ Company in the research, design and development of the Grand Theatre in 2009. This meant travelling to Italy frequently. He has taught over 30 pupils per week on both organ and keyboards in his studio. He also has given on-line lessons. He has been well known around the country and abroad as a prolific concert artiste. He has a varied repertoire and easy listening style. Music aside, Paul is one of the most friendly and humorous entertainers and he could 'go it alone' as a comediain. He is a talented singer and performs countless shows up and down the UK playing keyboard, guitar and singing. He is a thoroughly nice guy and a delight to spend an evening with. 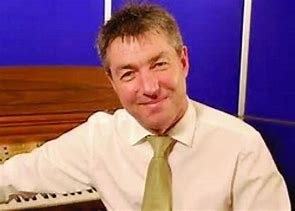