Ian Griffin, Britain's award winning keyboard player, first appeared on BBC 1 TV at the age of twelve in a programme which featured Britain's Young Entertainers. He played a Hammond organ and was voted back a second time by the live studio audience. In 1980, at the age of fifteen, he appeared in Britain's first Home Electronic Organ Festival and was voted the best player under the age of 18 by the readers of a national keyboard music magazine, In conjunction with the then Pontinental Holidays, the same magazine produced a series of Spring In Spain festivals resulting in Ian being filmed for Spanish television. In 1996 he was the musical director on HTV's 'Friday Night Live' - an early form of the X-Factor with famous personalities as judges on talent from Wales. Ian's gift of perfect pitch has been useful in accompanying many singers resulting in many accolades from fellow keyboard players. Appearances at all the major keyboard festivals, including shows with Richard Bower as the Keyklix duo, led to appearances on the continent including a Rhine cruise with Daniel Watt, which was exclusively for European keyboard enthusiasts. It was when co-producing organ-keyboard festivals for Pontin's that Ian met Andy Oakley, the most multi-talented artiste he has ever come across. Their shows together have delighted audiences at keyboard clubs all over the UK. Andy is featured in Ian's Winter Warmers together with Ian's Keyklix partner, Richard Bower, making the event so different to all others. 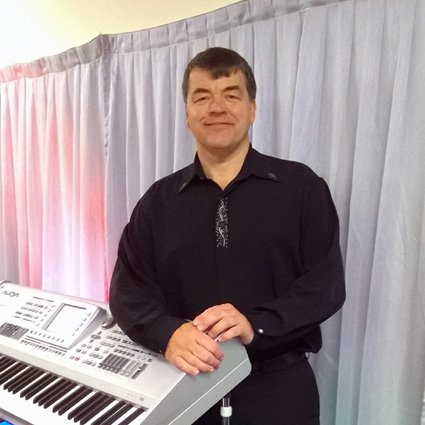