Since winning a holiday camp talent competition at the age of ten, David had a yearning to become a professional organist. With this aim in mind he began performing local charity concerts, and soon found that his services were in great demand. Family holidays taken at various organ festivals encouraged him further, and after winning the teenage talent competition at the National Home Organ Festival at Hemsby in 1983, David played junior spots at all of the major organ festivals both in this country and abroad. From the age of fourteen he began accepting semi-professional engagements at clubs in and around the Midlands, and on leaving school in the summer of 1986 he realised his ambition and became a full-time professional organist. Despite his youthful appearance, David has had considerable experience, playing for dancing and backing cabaret in the clubs, has been musical director for several variety and dance shows, and has made concert appearances at organ societies and festivals all over the country. During the late eighties and early nineties he obtained his grades in both organ and piano. Much of David's work is playing for strict tempo dancing (over 200 dances each year), where his reputation and popularity has taken him to venues throughout the UK. Whether it be Ballroom, Latin American, Modern Sequence or Traditional Old Time, David's perfect timing and careful choice of music ensure a full dance floor wherever he performs. He currently plays Technics GA3, modified to make it portable, plus a Yamaha PSR8000, for both concert and dance work, but a few years ago, due to the diminishing abilities of an ageing road crew, he purchased the Orla GT8000 Compact portable and uses this mainly in upstairs venues. David is available for concerts and dances throughout the United Kingdom. He always supplies his own equipment including P.A. and for concerts, video projection equipment. For suitable venues, full stage lighting and backdrop can also be supplied if required. His choice of music for concert performances includes all musical styles and he is often complimented on the wide variation of music featured. For dances he tailors the music to suit the occasion, whether it be Ballroom, Latin American, Modern Sequence or Traditional Old Time where he specializes in using original dance music where appropriate. David also runs a small organ and keyboard teaching studio where his students all enjoy private lessons with individual tuition, from basic to advanced level, on electronic organ, piano, or keyboard. Students from any age group are accepted, and facilities exist for entry to examinations with Trinity Guildhall. CD's are available direct from David. 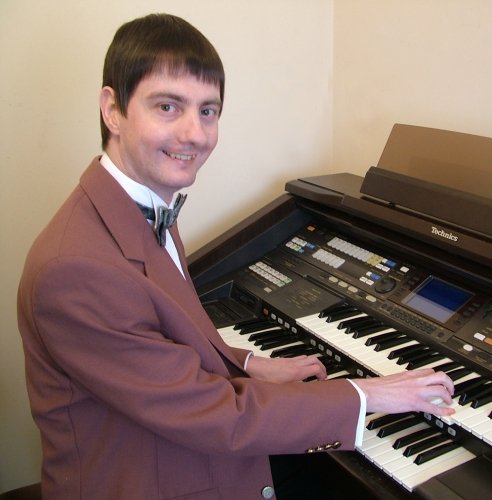