My interest in music began with piano, I studied this from the age of 11, until at 13 I was introduced to the electronic organ. At the age of 14 I gave my first public performance playing at my local organ society in Orpington as well as performing at my school both on organ and in various musical productions. Upon leaving school I worked in Estate Agency and then in retail, including an organ shop in Croydon. During this time I assisted as deputy organist at Streatham Ice Rink, playing Hammond C3 for dancing etc. I also performed Small concerts and music for dancing local to my home. It was not until 1985 when I met David Lingwood at the first Caister Keyboard Festival that I turned professional, since then I have played for most organ societies all over Great Britain including the Channel Islands both solo and in duet with David. I have also performed at all the major Keyboard festivals as well as writing for various Keyboard publications including keyboard Review and Keyboard Cavalacade. In 1991 I worked as Showroom Manager for Wersi at their UK headquarters in Purley in 1994 for GIG Sounds in Streatham, South London and 1995 Rose-Morris in the West End of London. In 1996 I was offered the job as Manager at Roland Friday Keyboards, Bromley and was very happy to accept this position in such a busy shop. In January 1997 Roland Friday sold his retail business to Music Land (020 8698 7300) and I continue to work for them on a part time basis with David Harrild and my colleges. I perform concerts and music for dancing country-wide on my fabulous Yamaha AR100 organ. In a brand new brilliant white portable cabinet including Ketron SD40 Arranger Module. Featuring the best of organ Theatre, Classical and Drawbars plus the latest sounds and styles courtesy of the Ketron. I can also provide a large overhead mirror. Excerpt from Belper & District Organ & Keyboiard club concert 18th May 2019 https://www.youtube.com/watch?v=o2iYVY3RQkg My hobbies include Photography, gardening, cooking, touring in my motorhome, working on my house, plumbing, electrics, carpentry, plastering etc and building organs. I really enjoy making a lightweight portable from heavy home organs. My first project was the Yamaha US1 back in 1992. After leaving Wersi and selling my Wersi Arcus i looked around for a new instrument. The Yamaha EL90 had just come out but it did not really interest me. I was always very impressed with the US1 with its superb strings and smooth organ sounds. The 61 note keyboards and 20 note pedalboard all with initial and after touch are the best in the business. It was just the size and weight that was an issue. After chatting to the Yamaha support team in Milton Keynes, who told me it was impossible i bought a 2 year old model and took it completely apart. 3 weeks later after making a new cabinet and stand the 3 manual touring organ was born. Initially i installed a Technics KN1000 keyboard as a 3rd 61 note manual. Over the years i have updated that to a KN5000 and now KN7000. In addition i have a CVS10, AVS10, Korg 01W and Roland Fantom sound modules. In the following years i built a Technics GX7 portable and a unique Technics GA3 portable. Finished in White. In the last couple of years I have built a sound proofed Music Studio down my garden so I can enjot my varied organ collection. My musical tastes cover a broad spectrum, though I am particularly keen on Musicals, Marches, Romantic Ballads and Latin American. In my current programme I might include selections from Oaklahoma, Mack and Mable, The King and I, Gigi in addition to music from Ivor Norvello, Sigmund Romburg and Eric Coats. To name but a few. I enjoy playing live without the use of backing tracks and sequencing. Bringing the best out of the instrument i'm playing. I also include a couple of vocal numbers including a chance for the audience to join in. In March 2010 i replaced my faithful 20 year old Ford Transit Minibus with a large luxury motorhome, i look forward to travelling more country wide entertaining and organising tours round different organ societies. 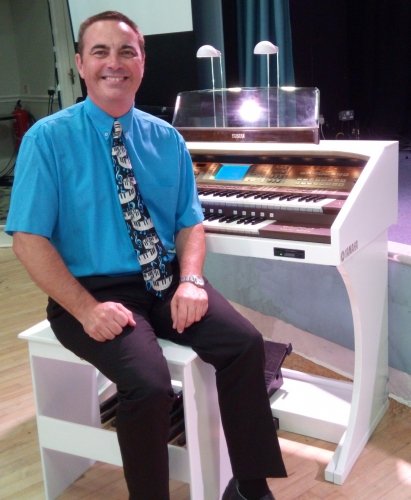